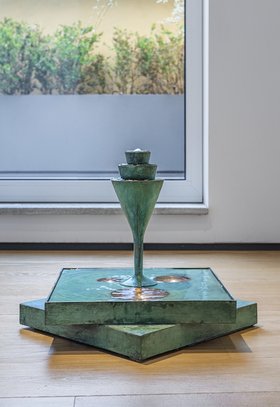 Water Source of Life
From September 5th to December 23rd, 2021

Gallery Moshe Tabibnia presents Water Source of Life, a new exhibition set up with the intention to merge two ongoing exhibitions currently involving the gallery: The Silence of the Roots at MIART Milan, in collaboration with BUILDING (September 17th-19th, 2021) and Drop by Drop Life Falls from the Sky. Water, Islam and Art, at the Museum of Islamic Civilization in Sharjah, in collaboration with MAO, Turin (June 8th - December 12th, 2021).

Intimate dialogue between the modern soul of BUILDING and the ancient one of the Gallery Moshe Tabibnia, the exhibition The Silence of the Roots, unveils an unprecedented installation dedicated to the artist Remo Salvadori, in dialogue with a selection of important ancient textile fragments from 15th to 16th Century, part of the Moshe Tabibnia collection. The works shaped by Remo Salvadori echo in unpredictable ways in the ancient textures of the textile works on display.

At the same time, three extraordinary textile works Gallery Moshe Tabibnia are unveiled at the Museum of Islamic Civilization in Sharjah, in the exhibition Drop by Drop Life Falls from the Sky. Water, Islam and Art, exploring the relationship between water and Islam, from its most ancient roots to its many complex developments. A narration through images, objects, artifacts, books and miniatures that reveals water and its multiple representations in Islamic art.

In connection with the MIART and Sharjah exhibitions, the gallery presents a new exhibition with some of the most significant works of the collection that refer to the theme of water and its infinite variations assumed in textile art: from the depictions of the rivers of the paradise, the representations of the celestial gardens, up to the many ornamental and symbolic motifs related to water and the rituals connected to it.

Main source of life and metaphor of eternal life, water has always inspired and permeated art since the times of the most ancient civilizations, conveying metaphysical symbols and evoking ultramundane landscapes and celestial realms. Fountains gush and streams flow in the numerous representations of the celestial garden, a recurring theme in all ancient civilizations and in all traditions in which the religious and spiritual dimension of life was strong.

In particular, the celestial garden in the Islamic imagination has assumed a very precise representation that followed the narration of the Koranic sacred texts and which is clearly visible in the so-called "garden carpets”: a category of carpets in which the garden is image of heaven. A real earthly landscape, the garden of paradise depicted on the carpets is a celestial map crossed by symbolic motifs, where water represents the source of eternal life.

Among the most emblematic works of garden carpet, the exhibition presents a classic example of "Chahrbagh" carpet ("Chaharbagh" garden carpet, Northwestern Persia, 18th Century, I half), the typical quadripartite garden in Safavid Persia of Achaemenid derivation, where a bird's-eye representation shows a garden populated by trees, animals of various species, and crossed by orthogonal water channels that flow into a central point, usually characterized by a large basin with a fountain.

Also on display are other Persian-made carpets and fabrics depicting precious gardens; including the "Salting" prayer rug from the Safavid period (Prayer rug, Central Persia, 16th Century, II half), whose field has a vase of water in the niche of a mihrab from which flowers and various plant motifs spring.

The tradition of the Persian garden is reinterpreted in a more lyrical dimension in the extraordinary carpet of the Mughal period ("Amber" carpet in shape, Lahore ?, Northern India, around 1650), which previously belonged to the collection of Maharaja Sawai Man Singh II, where the composition adorned with roses, irises and poppies, is the dreamlike expression of the aristocratic refinement of the Mughal court culture.

One of a kind specimen, on display a singular Caucasian garden carpet (Garden carpet, Caucasus, 18th Century), whose design of Persian ancestry, presents a very rare green field adorned with flower beds and a large central pool characterized by red water and populated by abstract motifs. Central symbol of this garden, the water of the swimming pool is a metaphor of immortality and eternal life. Red water, a primordial vital liquid, gives life to the garden itself and its beauty. Abstract symbols float on the water of which only the central one is legible to us: it brings back the four cardinal points of the universe to remember how cosmology was always woven into the 'naturalistic' vision of the celestial garden.

Not only in the works of the Oriental tradition, water also appears in the artistic and symbolic imagery of Western countries: a jug surrounded by flowers stands out on two precious embroideries of the 17th Century Epirus, on display, where water is a symbol of purity to represent the bride "chaste as crystalline water"; while a luxuriant nature animates the Flemish "Feuille de Choux" tapestries of the 16th Century, two on display, evoking not only exotic landscapes but also the biblical Garden of Eden described in the Old Testament.

The path continues, leading the visitor to immerse himself in the sinuous vegetation of the Chinese-made carpets of the Ming period (Carpet with floral decoration, Beijing ?, China, 16th Century, II half), where compositions of peonies, lotus flowers, chrysanthemums and various other floral types refer to the elegant refinement of the Chinese imperial court.

Also important textile fragments embellish the exhibition: works of extraordinary historical-artistic importance, created by the most important civilizations that have excelled in textile art, starting with a Coptic tapestry of the 6th Century AD, one of the oldest existing textile testimonies, passing for refined Safavid embroideries and sophisticated Hispano-Moorish fabrics of the 15th Century.

Focal point of the exhibition: Una sorgente nel punto dello sguardo [A source in the point of the gaze], a work by Remo Salvadori that reflects on the vivifying and springing action of water, the flow of which activates the process of vision through the gaze of the subject and offers itself as a "continuum" suspended between Infinity and Moment. And among them the spatial and temporal evolution of existence develops. 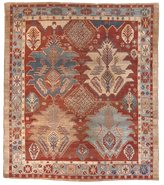 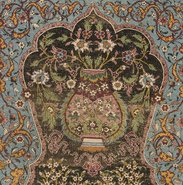 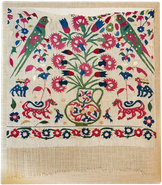 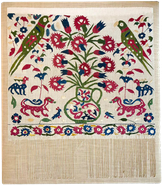 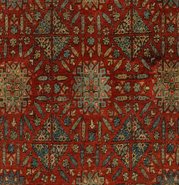 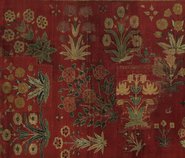 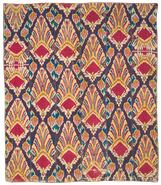 Ikat fabric with palmettes design on a blue ground 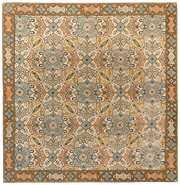 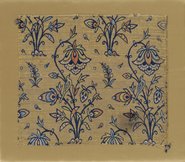 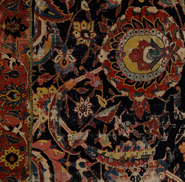 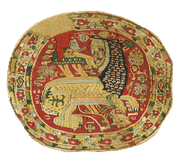 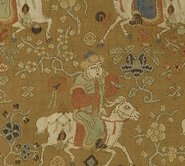 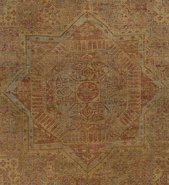 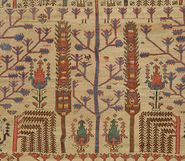 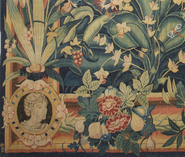 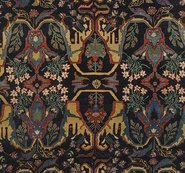 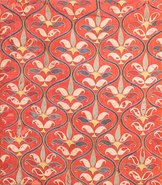 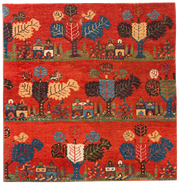 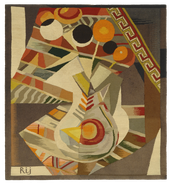 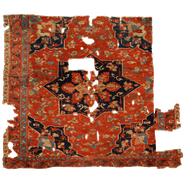