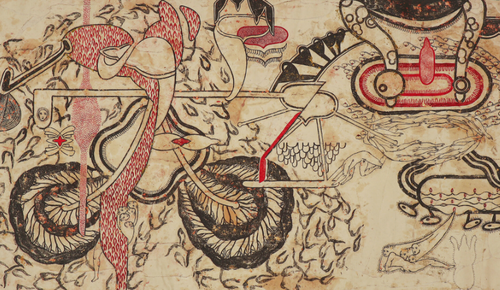 Il Numinoso
EXTERNAL EVENT
From October 27th, 2022 to January 28th, 2023, BUILDING presents the exhibition Il Numinoso curated by Giorgio Verzotti, which explores the sense of the sacred in contemporary art.

Bringing together paintings, sculptures, photography, textiles, drawings and installations, it is hosted in BUILDING gallery and in Basilica di San Celso, where from November 9th to December 22th a number of artworks will engage with the atmospheric setting of a holy place.
Simultaneously, Moshe Tabibnia Gallery will host Sacro concreto exhibition, which explores the theme of the sacred in antique carpets and textiles, with a critical text by Marco Meneguzzo.

The term numinous that inspires the title of the exhibition comes from a 1917 essay by Rudolf Otto entitled “The Idea of the Holy”. Otto defines the numinous as a powerful, extra-rational, invisible presence that incites both terror and awe. This essential ambiguity is a defining characteristic of the sacred, which manifests itself through the numinous to a subject that, according to Jung, is invariably overpowered by it. Hence the use of religious practices, developed from ancient times with the idea of “taming” the numinous to make it less terrifying, sublimating and controlling it through liturgical rituals.
The numinous can thus be interpreted as a threshold that allows the subject to contemplate the sacred without being overwhelmed by its power: can we therefore view the work of art as a device that, like the liturgies, “sublimates” and “tames” the sacred, engaging with it intellectually, given that it cannot be experienced?