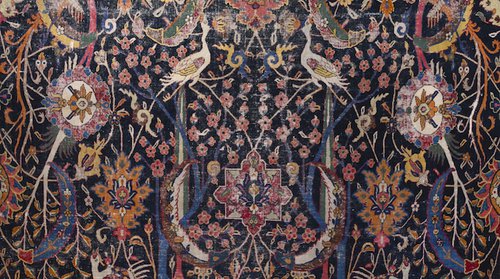 The Magnificent Sanguszko Carpets
EXTERNAL EVENT
“The most beautiful carpets in the world”: a group of masterpieces from 16th century Persia

From an idea: Bruschettini Foundation for Islamic and Asian Art
Curated by: Michael Franses

The peak of the production of the Persian carpet was in the Safavid period, between 1525 and 1575, during the reign of Shah Tahmasp I. The fabulous representations of the "Garden of Paradise", the work of the main artists of the time, date back to this period.
The carpets acted as real 'portable gardens', an image of the divine on earth, gardens of delights filled
In this particular exhibition, we present the so-called “Sanguszko carpets”, named in honor of the most spectacular example that is said to have been with the Sanguszko family, in Ukraine, for many centuries.

Today, fourteen carpets which were probably made in the same area, are known as the Sanguszko carpet, as well as two other closely related ones.
This extraordinary exhibition was born from one of the Sanguszko carpets in particular, the one now owned by the Valencia de Don Juan Institute in Madrid, for which in 2017 the Bruschettini Foundation for Islamic and Asian Art in Genoa financed an important conservation project at Open Care of Milan.
In the past, the Foundation has already organized exhibitions at the end of conservation projects for works from public institutions, presenting the preserved objects together with other related works.
These cultural initiatives offered to the public the unique opportunity to compare extraordinary masterpieces created in often little-known production sites. On the occasion of this exhibition, visitors will be inebriated by the amazing colors and extraordinary decorative motifs of Sangusko carpets.
Today the location of all fourteen so-called Sanguszko carpets is known, except one, and are found in twelve different locations: Shiga (Kyoto), Paris, Lyon, Boughton, Berlin, Milan, Tehran, Madrid, London, Vienna, Boston, Washington DC.
Palazzo Rosso is committed to gathering as many Sanguszko carpets as possible and has already received general commitments to exhibit seven of the fourteen carpets. This is by far the largest number ever gathered together in one place.

If assembling such a large group of the most important Persian carpets of the 16th Century is unprecedented, the role of the city of Genoa in such an event is not.
At the beginning of the 14th century, the Genoese had a consulate in Tebriz. The Genoese were very favorable to the Īlkhān court. Most of the Īlkhān's envoys to the pope and the kings of Europe were Genoese; in 1344 al-Ashraf, then prince of Tebriz, sent an embassy to Genoa(quote from documents of the 14th Century).
During the 16th Century, the finest silk that could be procured in Europe came from Persia; much was bought by the Genoese merchants in Aleppo and together with spices and dyes everything contributed to greatly enrich the city of Genoa, and the Genoese residences too, in the following century.
Palazzo Rosso will also add some exceptional Persian carpets from other centers to the show of weaving, as well as a selection of Persian artifacts and Safavid miniatures contemporary to the carpets, which together will place the magnificent Sanguszko carpets in their historical context.
For lovers of extraordinary beauty, this is undoubtedly an exhibition not to be missed.
At present day, fourteen so-called ‘Sanguszko carpets’ have been located, except one. They are found in twelve different locations: Shiga (Kyoto), Paris, Lyon, Boughton, Berlin, Milan, Tehran, Madrid, London, Vienna, Boston, Washington DC.

For many of those which will not be presente, there will be life-size reproductions in the principal room of the first floor of the Palace. On the second floor, there will be further nine historical carpets from Kirman, Mashhad and Qazvin, exhibited in order to place the ‘Sanguszko’ carpets into their historical context.

Gallery Moshe Tabibnia is exceptionally lending three of the eight carpets on display, two 'Sanguszko' and one Kirman, now part of the gallery’s collection, respectively from the reknown Rothschild, Benguiat and Jekyll collections.